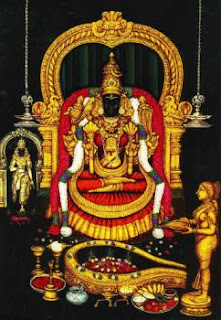 We celebrated "Karadayan Nonbu" or more simply Nonbu.
This is a very important festival in our calendar. This festival is celebrated at the time of Meena Sankramam orPanguni Masam. (The time the sun enters the Pisces sign, according to the solar calendar) and hence the time of offering the pooja falls at different times of the day in different years. We offer Pooja any time during the 24 hours, from the wee hours to mid-afternoon to evening to midnight. Hence, this festival is very different from all the festivals, which are celebrated on a particular day of the year at a particular time. Nombu has to be finished in the month Maasi and before the beginning of the month of Panguni .which happens on the same day March 14th 9:14 a.m. The time for the nombu is specified as7.30am to8.30am.

During Karadayan Nombu women invoke the blessings of Goddess Gowri to obtain an ideal husband during all seven births. While unmarried girls pray to get a good husband, married women pray for their husband's long life. This pooja is especially done for the well being and long life of the husband and even little girls are made to perform this pooja so that they will get a good husband and a happy married life

The neyvedyam (offering) for the pooja is a very simple steamed sweet cake and butter. (Nonbu Adai)The ladies and girls also wear a "manjal charadu"(a thread dipped in turmeric paste), similar to one tied during the time of marriage. In the olden days, when we were children, it was a practise to keep this manjal charadu till the next nonbu or as long as it lasted.
Story behind Karadayan Nombu:
The story behind this festival is said to be that of Sati-Savithri.Savithri was born as the daughter of King Asrapathi. Savitri was a princess of a rich kingdom in ancient India and was the only child of her parents. When she reached marriageable age, she told her father that she would herself search for a suitable husband for her. At last in a forest, she met an old couple and their young and handsome son serving them, living in a simple hut. She found out that the couple were the king and queen of a nearby kingdom, banished from their kingdom by their enemies.She decided that he was the suitable husband for her. The name of this young man was Satyavan. True to his name, Satyavan was very honest and dedicated to his parents. Savitri returned to her parents and announced that she would marry only Satyavan. The King and the queen were not very happy to marry their only child to the son of a banished king.

The palace astrologer, however warned her that according to his horoscope, Satyavan had only one more year's life left and he would die in a year. Savitri was not to be discouraged with this announcement either. The marriage of Satyavan and Savitri was performed and Savitri went to live with her husband and in-laws in the forest. Savitri took care of her husband and old in-laws with dedication and devotion and followed Satyavan whenever he went inside the forest in search of food and fuel. Days passed and the last day of Satyavn's life as per the prediction dawned. Savitri insisted on accompanying Satyvan to the forest. Satyavan made Savitri sit under a tree and went to fetch fruits and logs for fuel. After sometime, he returned feeling very tired. Savitri made him lie in a bed made of fresh green leaves keeping his head in her lap. As Satyavan started closing his eyes, there appeared in front of Savitri, a huge figure with a bison for his vahana. Savitri with her dedication and devotion could immediately recognize the figure as that of Yama, the God of death. She immediately saluted him and asked him the purpose of his visit. Yama replied that as destined Satyavan's life span was over and he had come to take his life to the other world. Saying this Yama started walking away with Satyavan's soul. Savitri left the body of the lifeless Satyavan under the tree and started following Yama. Yama forbade her from following him, saying she could not follow him to the other world, as Yamaloka was inaccessible to living beings. Only souls of dead beings are taken there. Savitri insisted on following her husband’s soul. Yama could not stop her from following him. At last, Yama agreed to grant her three wishes on condition that she would go back. She agreed. She asked as the first boon, that her in-laws get back their lost kingdom which Yama granted readily. For the second wish she asked that, as she was the only child of her parents, they get more children. This was also granted by Yama immediately. As the last wish, she asked that she be granted the wish of having many children which also was granted by Yama in his eagerness to get rid of her. Only after granting this wish, did Yama realise that he had been tricked into granting Satyavan life, as a pious and pathivratha (chaste) woman like Savitri cannot have children if Satyavan were to be dead. Yama had to accept his defeat and restore the life of Satyavan. Savitri came back to the tree where she had left the lifeless body of Satyavan. By the blessings of Yama Satyvan woke up as if from his sleep and Savitri narrated the happenings to him. To offer her gratitude to the Gods, Savitri immediately made a simple neyvedyam with available things on hand and tied the mangala sutra once again as her husband had got back his life.
Her offerings were durwa grass and peepal leaves.She performed neivedhyam with wild rice and toor dal. that is kaara arisi and thuvaram parrupu that is why this vratham is known as karadayan nonbu.Yamadharma realized that in order to grant Savitiri's wish he would have spare Sathyavan's life.So he granted her wish to honor her courage and devotion to her husband.So this karayadan nonbu protected her husband.Prayers are offered to GowriDevi and women meditate on Savitiri and wear a yellow thread round their neck as they chant the following sloka.
"Throram Krishhnami subhake saharithamDharami aham
bharthuAyushya Sidhartham supreethabhava sarvadha."
The following is the tamil chant
"Urukaddha Venneyum oradhayam naan nootren
Orukkalum en kanavar ennai vittu pririyadhirukka vendum."
which means I offer butter and the rice made out of kaara arisi bless me that i live happily with my husband.
Neivedhyam:
Neivadhayam is made of banana leaves Neivedhyam consists of Adai made out of rice and butter, and adai made of rice and jaggery also, along with butter kept seperately.Vethalai paaku pazham is also offered to the Goddess . On this occasion let me wish all the ladies a happy karadayan nonbu.
Posted by Jaishree Iyer at 3:38 PM

Smooth roads never make good drivers. Smooth seas never make good sailors. Clear skies never make good pilots. A problem free life never makes a strong and good person. Have a tough but winning day ahead! Be strong enough to accept the challenges of life. Do not ask life, 'Why me?' instead say,'Try me'."

This work is licensed under a Creative Commons Attribution-Noncommercial-Share Alike 2.5 India License.